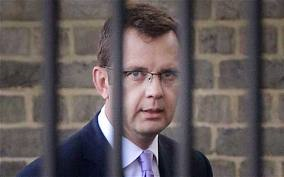 The decision to award Andy Coulson a custodial sentence for his crimes and misdemeanours is hardly one that his old employer would argue with if they had an ounce of integrity. The News of the World and other News International papers are not known for their soft on crime and the causes of crime approach. However it is hard to explain why Andy Coulson is seen as any physical threat to our society. Whilst it is vital is to send a message to other Newspaper journalists and publishers that what he and his colleagues did is judged to be appalling and they need to pay a price for their failure to follow the norms of society, the question is does prison satisfy this. However accepting that he is to be incarcerated at ‘Her Majesties Pleasure’ the next issue is to reflect on the best way of doing this. As this report makes clear, because a retrial is planned for Mr Coulson at the Old Bailey, he is being held at Belmarsh Prison, yet the judge in this story has pointed out that such a retrial is some way off. At the time of this stories publication, Mr Coulson had spent 3 weeks in the Category A or dispersal Prison, that has now extended to 4 weeks. The nature of Mr Couslons crimes mean that he should in principle be held at an Open Prison. It is hardly a surprise that that cost of holding a prisoner in a place like Belmarsh is a great deal more expensive than the cost of holding them in an open prison. A report in October by the Ministry of Justice calculated the cost of incarceration at an open Prison during 2012/13 as £26,000 or £500 per week. The cost of incarceration at dispersal or category A prisons was calculated as £60,000 per year or £1,160 per week. This means that a 4 week stay in Belmarsh rather than in a prison like Ford here in Sussex costs you and I £2,640 or £34,000 if his stay at Belmarsh was extended for a year.

It has been suggested that the cost of the trial of Andy Coulson to you and I has already amounted to £750,000. It simply adds insult to injury that the tab on his behaviour is continuing to mount, simply due to inefficiencies in the system which decides which prisoner gets sent to which prison.

I am passionate about the need for public policies to be made accessible to everyone, especially those who want to improve the wellbeing of their communities. I am particularly interested in issues related to crime and policing as well as health services and strategic planning.
View all posts by ianchisnall →
This entry was posted in Journalism, Justice Issues and tagged Andy Coulson, Belmarsh Prison, News International, News of the World. Bookmark the permalink.