Yes, No and Maybe

Posted on September 1, 2014 by ianchisnall 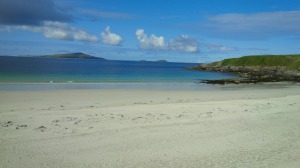 For a short wonderful week I have been privileged to peer into the life of modern crofters, staying with people whose lives on the Isle of Harris bear very little similarity to that of my own here in Brighton. On many of the qualitative measures their life experiences are a great deal richer than that of my neighbours in Sussex. The wildlife is teeming and accessible by even the most pedestrian twitcher. The level of discernable community cohesion is many times greater than that I have observed here in Sussex, amongst people, some of whom have lived on the Island all of the lives and some of whom have only been residents for a decade or less, although of course all communities are challenged from time to time by differences of opinion. There are many areas where the Islanders are disadvantaged when compared to our life in Brighton. The nearest formal shop or garage was around 5 miles away, and the nearest Supermarket with its extensive range of products was over 50 miles away over roads that I would be nervous of in the Winter with sheer drops and few if any barriers if one did skid. However the drops provide access to the most wonderfully scenic views so some gains when there is not ice on the ground!

Our visit to Harris was not planned to coincide with the run up to the referendum, but it is clearly one of the issues that is beginning to create difference between some residents of the Island in a way that political views have not done to the same extent previously. It is far from clear if there will be any legacy of this polarisation amongst the residents mowing YES or NO in their gardens. Some we spoke to, particularly on the No side were clearly concerned about this possibility and whilst Yes supporters did not disclose the same level of anxiety, one sensed that they were not as confident as their comments implied. As we travelled from the South to the North West, and then back again, there was a clear distinction based on roadside flags and signs between the Highlands and Lowlands, perhaps in the Northern Highlands, England and Westminster does seem very distant. There were also many people whose views on this contest are far from settled, and some whose decision seems to have been based on rather limited issues.

In all of the main towns and cities that we visited (including the one serving the Isles of Harris and Lewis) we observed the displays and supporters of Yes and No, standing a few yards apart on the main thoroughfares of each town. Their contrasting red or blue displays highlighted for me that there was no one waving a flag for those residents who are currently undecided. This is a parallel to the problem faced by those of us who are unable to choose a candidate in local elections who we are confident in. None of the Above is not an option that is provided during Council and Parliamentary elections in the UK and Maybe is not an option being provided to the Scottish residents. It is clear that a decision is needed regarding the Independence or Co-dependence of Scotland. However some of us are faced with a choice we do not fully support, or the decision to opt out of the election altogether. As a Democrat I believe that voting is an obligation, in part one that reflects the lives lost during World War 1 and during the Suffragette movement. However when I am faced with a choice that I cannot agree with, then how can Politicians really claim to have heard from me?

I am passionate about the need for public policies to be made accessible to everyone, especially those who want to improve the wellbeing of their communities. I am particularly interested in issues related to crime and policing as well as health services and strategic planning.
View all posts by ianchisnall →
This entry was posted in Parliament and Democracy and tagged None of The Above, Scottish independence referendum 2014. Bookmark the permalink.