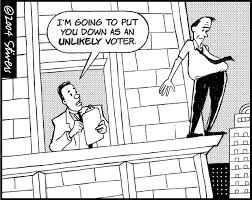 Last night sitting at home, the phone rang and at the other end was a polling organisation, wanting my opinion on who I would vote for in the forthcoming General Election. The first question should have given me the hint that I was not really the target audience, when they asked to speak to someone younger. However once we had satisfied them that I was the only person willing to speak to them, the questions began. The final question was typical of how frustrating the process was. If I was faced with a choice of Government next May between a Majority Conservative, a Majority Labour, a Conservative – Lib Dem coalition or a Labour – Lib Dem coalition which would be my preference. Sadly none of those choices were remotely appealing and there did not appear to be an option for ‘none of the above’. The questioning did begin with a focus on my own constituency and how I would vote, so perhaps that was the point of the exercise. However my own true preference will need to remain between me and the ballot box as the pollster did not elicit my real views. They did not even offer me a don’t know option!

I am passionate about the need for public policies to be made accessible to everyone, especially those who want to improve the wellbeing of their communities. I am particularly interested in issues related to crime and policing as well as health services and strategic planning.
View all posts by ianchisnall →
This entry was posted in Brighton & Hove, Parliament and Democracy and tagged General Election 2015, Polling. Bookmark the permalink.

1 Response to The cold call