We need to refocus 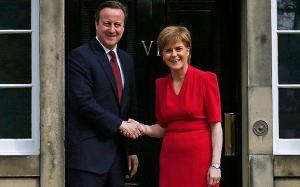 The image of one of the UKs most popular statespeople shaking hands with David Cameron on the doorstep of her officical residence provides us with symbolism that could not be more significant. While Cameron was photographed in Scotland, a photo of Boris arriving at Downing Street was also circulating. The pressure on all of the other parties with the possible exception of Plaid Cymru to find new leaders or explain why the current leader should stay may lead us all to think that the big issue is one of leadership. However the fact that the Prime Minister of the UK is seeking support for his measures from Nicola Sturgeon points towards a shift of power away from Westminster. In the case of the SNP with a party membership around 3 times the size it was before the Independence referendum, there is a changing dynamic within the Party and following the General Election result that is being felt more widely. Something similar has been taking place within the Green Party and UKIP and even the Lib Dems are now seeing a resurgence which will bring change in its wake. It is natural for the media to stick with what they are used to, doorstepping leaders and leadership candidates. However just as the Political Parties are experiencing change, we also need to consider the change that is needed as we all come to terms with 5 more years of austerity and blue on the rest of society unfriendly fire incidents. Unlike the people who work for Network Rail and who are planning to strike on 25th May, we cannot all rise up against the decision making in the hope of changing the direction of travel, yet we do need to do something, particularly if we are to avoid the worst excesses of the unfeeling decisions taken by the new Government. Arguably they have more to gain by us rising up against them, than if we chose to take them at their word and do begin to play a more active role in the running our localities. Once it becomes clear that we don’t need Party Politicians to decide what happens to us at either a national or even a local level, the support for Party Politicians every 5 years may become even lower than it currently is, perhaps that is the way to shoot the Tory fox, so to speak and the Labour one too!

I am passionate about the need for public policies to be made accessible to everyone, especially those who want to improve the wellbeing of their communities. I am particularly interested in issues related to crime and policing as well as health services and strategic planning.
View all posts by ianchisnall →
This entry was posted in Parliament and Democracy and tagged David Cameron, Green Party, Lib Dem Party, Network Rail, Nicola Sturgeon, SNP, UKIP. Bookmark the permalink.