Posted on September 6, 2015 by ianchisnall 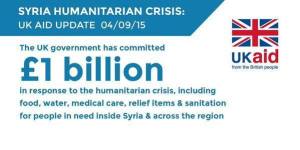 Few Sussex MPs make themselves as accessible on social media as MP for Crawley, Henry Smith. For this he deserves every bit of the commendation that Brian May paid him prior to the last election. However inevitably this also means he posts things that he believes will support his cause and because he is a Tory, that often means we disagree such as on this occasion! Its vital that our Political leaders understand both the value of their decisions as well as the absolute cost. Every pound spent so far on helping the people of Syria is a good thing, in the light of the plight these people are facing. However once people like Henry or Simon Kirby start using the sums involved as a basis for justifying refusing to take in any refugees, the amount of money needs to be compared to other expenditure, so that we can understand what the value of this is in terms of the UK Parliament and its priorities.

The UK Parliament costs around £2Bn per year to operate, a sum that rises every time David Cameron appoints new Peers to the House of Lords as he did a few days ago.

It is estimated that the House of Commons and House of Lords required a sum of £7Bn to remedy the historical maintenance issues in the building.

It is estimated that HS2, a rail system that will reduce the time it takes to travel from London to the North of England by a few minutes each journey will cost £45 – £60Bn.

It is estimated that the cost of replacing trident, a nuclear deterrent will be some £100Bn over a 20 year period. This is £100Bn for a set of missiles and submarines that patrol the oceans primed to fire in a war that no one ever wants to happen. Some describe this as a deterrent, even though the greatest threat to the West no longer comes from a few world powers with nuclear weapons who would be deterred simply because we also have a nuclear weapon.

At the height of the banking crisis, the UK Government had spent £955Bn of our money in shoring up banks and other financial institutions. A sum that has dropped significantly but which is still around £600Bn today.

So when MPs like Henry Smith use the graphic above as a basis for the refusal by our Government to let refugees enter our land, he is failing to explain how much more value we place on these other priorities. Matters which unlike the refugees point to our own preference, history, comfort or strange sense of security or in the case of the financial crisis, a catastrophe that was created by men and women who have never been held accountable for their own actions and which we are still being expected to pay for.

I am proud that we have spent £1Bn from existing aid budgets to help the region around Syria, that seems to be a very good start. However had our Government decided to use weapons in Syria my suspicion is that we would have spent much more. The UK costs for the war in Afghanistan when calculated in 2013 were some £37Bn. However when there are people in need our response needs to go beyond throwing money at the problem. We need to make practical provision for some of the Syrian people displaced from their homes and if that involves creating accommodation for 100,000 people then lets do it with generous attitudes and not be dragged, kicking and screaming to do so.

I am passionate about the need for public policies to be made accessible to everyone, especially those who want to improve the wellbeing of their communities. I am particularly interested in issues related to crime and policing as well as health services and strategic planning.
View all posts by ianchisnall →
This entry was posted in Economics, Parliament and Democracy, Syria and tagged Afghanistan, Foreign Aid, Henry Smith MP, HS2, Palace of Westminster, Parliament, Refugees, Simon Kirby MP, Syria, Trident. Bookmark the permalink.