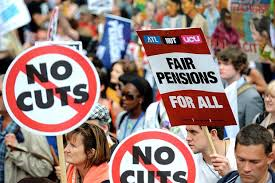 When jobs are lost due to external forces, all organisations are tested for their organisational resilience and people who have previously been unable to progress into new roles suddenly discover opportunities that they never expected to see. There are many private sector examples of where this sort of process can lead to a major improvement in performance, the dead wood has gone and the new green shoots really do bring fresh and vibrant growth. However there are also substantial examples of businesses that decline and in some cases do so in a catastrophic manner. The people who have left carried with them key parts of the DNA of the success of the organisation and their roles are filled by people who may have many great strengths, but who do not have the qualities needed to extend this success or find new forms of success. This can lead to subsequent departures from other key people who cannot work under the new regime, they are sometimes aided by an offer of voluntary redundancies. The failure of a private business, usually in a competitive environment may temporarily reduce choices for the consumer and reduces the work opportunities for those who subsequently lose their jobs as the company fails. It may damage the life experiences of those who invested in the company. However these issues will only impact a small number of people. If the jobs lost are in a public service, the loss of key people with skills or experience that cannot be replaced leads not to additional lost jobs or insolvency, but instead the organisation becomes more and more troubled as it attempts to deliver statutory commitments with fewer and fewer of the core skills needed to do so. The prospects for changing the way in which the organisation works to take advantage of new skills is very limited due to the ‘way things have already been done’ chorus that usually remains in the organisation despite the most challenging circumstances and strong internal leadership when there are tough external battles to fight is hard to exercise. There are limited prospects for buying in skills in the public sector, simply because public sector salaries are restricted by various rules, particularly in times of austerity. This means that we can end up with a body, slimmed down to match the austerity measures rampant in the nation, but with some of the wrong people in the vital jobs that need carrying out. Rather than being leaner and fitter, the organisation ends up appearing malnourished and unsuited to do any of the tasks that the community needs it to carry out. It is then that the collateral damage takes place, even though the organisation is still there, consuming public resources, and defending its statutory right to do the jobs that need doing, it lacks the capacity to do these jobs well and the most vulnerable end up suffering as a result.

I am passionate about the need for public policies to be made accessible to everyone, especially those who want to improve the wellbeing of their communities. I am particularly interested in issues related to crime and policing as well as health services and strategic planning.
View all posts by ianchisnall →
This entry was posted in Parliament and Democracy and tagged Austerity, Private Sector, Public Sector. Bookmark the permalink.