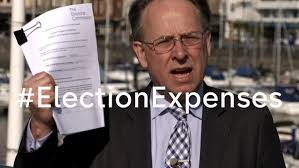 The idea that a major political party can operate without effective administration is completely risible. The way in which modern political parties operate and the amount of money they spend from the public purse, let alone from powerful donors to ensure they are well run demands the sort of efficiency that means that every penny can be accounted for, knowing what is spent, by whom and for what. Indeed it is this level of scrutiny and the risk of getting things wrong that puts some people off standing for public office. The reason why these rules exist is simply because each of the parties does not want any others to have an unfair advantage over them. Inevitably mistakes do happen, and occasionally these become a matter of public record such as this story from 2012 when the Liberal Democrats in Crawley were late filing their list of candidates and were prevented from standing in the Council election. As they discovered there is a penalty to pay for getting things wrong, for missing deadlines. The Lib Dems were humiliated by all of the other parties as well as denied an opportunity to be elected.

If a party can be suffer as a result of not getting the paperwork in on time, what about an MP who remembers to claim his expenses for a pint of milk and a packet of tea bags, but fails to register that he has earned £400,000 using the excuse that he ‘forgot’ to hire an office clerk to help him with his paperwork? Surely there should be a chance for local people to reflect on their decision to elect him. After all if he was working for an employer and he did something similar he would have faced a series of difficult meetings and may have been left without one of his two jobs. However Geoffrey Cox who is the MP for Torridge and West Devon does not appear to be the sort of person who would willingly submit himself to scrutiny that is not demanded. At the same time as he was too busy to declare his extra 2000 hours of work as a Queens Counsel, he was involved in an investment that HMRC had deemed to be a tax avoidance scheme, and he claimed that he had instructed his financial advisers to not involve him in ‘aggressive tax avoidance’ so it was not his fault, it was theirs!

By the same token Political Parties, that fail to declare their election spending should also be penalised and their actions ‘scrutinised’ by those who elected them, effectively under false pretences. If they spent money that they did not declare at the time of the election as the rules demand, then the election result must surely be declared invalid as well as there potentially being penalties for such failings in legal terms. A sum probably somewhere between £58,000 and £38,000 depending on which news story one follows, was not declared by Conservative Central Office as part of the General Election in 2015. According to investigations by Channel 4 this appears to be because the sum was spent across 26 or possibly 29 constituencies as Central Office organised squads of volunteers to flood target seats, and the sum covers hotel and travel expenses for these people. If the sums were declared locally as many believe they should have been, they would have exceeded local spending limits and the election of the individuals would be open to question which would bring the result of the General Election into question, reducing the Tory majority substantially. However if the expenditure was part of a national campaign, then surely the whole election must be declared null and void? Otherwise what is the point of having election rules? When Grant Shapps, who was Party Chairman at the time of the election was asked by Andrew Neil, who was responsible? he replied: “Other people, I don’t want to go into more detail.” The party has admitted failing to declare £38,000 of general election expenses for accommodation costs, blaming an “administrative error”. These failings suggest that the Conservative Party is not capable of running itself, let alone fit to run the country.

I have signed this petition which calls on Parliament to “change the law so that a by-election is automatically triggered if the financial rules on electoral expenses are proved to have been broken. Without a by-election in these cases, the legitimacy of the MP’s seat is questionable.” Clearly it seems unlikely that 620 Turkeys will vote for Christmas for 30 of their colleagues but it is surely time that all MPs are held accountable for their misrepresentation of the financial returns. The now discredited London Mayoral candidate, Zac Goldsmith once campaigned for an individual right to recall to be available in all constituencies. Perhaps it is time for this suggestion to be reconsidered, and one that also allows for the country as a whole to recall its Government?

I am passionate about the need for public policies to be made accessible to everyone, especially those who want to improve the wellbeing of their communities. I am particularly interested in issues related to crime and policing as well as health services and strategic planning.
View all posts by ianchisnall →
This entry was posted in Parliament and Democracy and tagged Conservative Party, Crawley, Geoffrey Cox, Liberal Democratic Party, Michael Crick, Right to Recall. Bookmark the permalink.