Posted on January 1, 2017 by ianchisnall 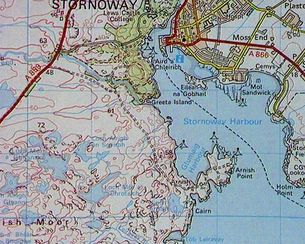 Exactly 98 years ago today a ship named the Iolaire ran onto rocks at a place called Holm at the edge of the natural harbour of Stornaway and within sight of the dockside. Holm point is shown a the bottom right hand corner of this map. The ship was carrying far too many men but this was the end of 1918 and the 284 passengers who had been fighting and survived the great war were understandably desperate to see their families. Tragically 205 of the men died, devastating many of the communities in Lewis and to a lesser extent Harris. There is an account of this tragedy here. The numbers of men fighting for our future from Scottish communities was far great in proportionate terms than in the rest of the UK. Many of the families living on Lewis eventually set sail for America as a result, further impacting the Isles of Lewis and Harris. This sinking was especially poignant coming at the end of the war. However in my mind I can see parallels between the loss of the Iolaire in January 1919 within 12 miles of Lewis and a ship that sank less than 22 months earlier in the English Channel within 12 miles of the Isle of Wight as it headed for France. The SS Mendi was not carrying men from rural Scotland, but from rural villages in the Transkei region of South Africa. The ship was carrying 823 South Africans who had been recruited to dig the trenches for the Allied troops as the Allies began to run out of supplies of men and materials. Although these men were brave warriors the racist attitude in the British Government meant they were not trusted with weapons. Equally because they were black South Africans they were not eligible for any medals from the South African Government . There is more information here. On 21st February 2017 the Mendi collided with a mail ship which carried on and did not stop to help save any of the men in the water. Over 600 men perished due to the lack of lifeboats. A resonance to the story of the Iolaire where only 2 lifeboats were fitted.

The loss of both these boats created devastation in the places from which the men had come. Both communities gave up their menfolk so we could be free from oppressive Governments and so our children could have better lives than they had experienced. A total of more than 800 brave warriors lost to the cold waters around our Island nation within a 2 year period. These two sinkings represent a huge proportion of the deaths that took place outside of the scenes of conflict. Yet because of the isolation that exists between the UK as a whole and South Africa and rural parts of Scotland, neither of these stories are well known. It is time to change that and celebrate these brave men and their sacrifices.

I am passionate about the need for public policies to be made accessible to everyone, especially those who want to improve the wellbeing of their communities. I am particularly interested in issues related to crime and policing as well as health services and strategic planning.
View all posts by ianchisnall →
This entry was posted in Obituary and tagged Iolaire, Isle of Lewis, Isle of Wight, SS Mendi, Stornaway. Bookmark the permalink.