Sitting in the wrong part of the room? 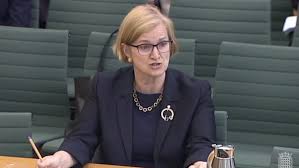 The latest comments made by Amanda Spielman imply that for once Ofsted, the agency she runs is focusing on the wrong group of people and organisations. However the conclusion she has reached will give a positive message to those who usually live in trepidation of the visit from an Ofsted inspection team. This photograph shows Amanda when she was in one of the committee rooms in Portcullis House in the House of Commons. These rooms are used extensively for scrutiny committees where the MPs sit in an elongated semi circle, the Chair and Vice Chair at the vertex, opposite those being scrutinised and in view of all of the other members of the committee, the committee is steered and directed by the Chair, ensuring that the views of those being scrutinised are fully exposed and dissected.

In this photograph it is Amanda who is being interviewed by MPs but she stated at a recent conference, what schools should be doing, is getting back to the real “core” work and offering children a good, well-rounded education. She went further and stated that Ofsted plans to punish schools that chase meaningless “badges and stickers” and turn themselves into exam factories. She has told schools not to overlook the importance of a balanced curriculum in their efforts to achieve high exam results. “Important as exam results are, we must not allow curriculum’s to be driven just by GCSEs and A levels, or by what students believe will help them get the highest grades,” she said. “It is the substance of education that ultimately creates and changes life chances, not grade stickers from exams. What you study matters, not just the grade points. “So I am determined to make sure that the curriculum gets the proper attention it deserves.”

I believe we need to encourage Ofsted to reverse the focus of scrutiny committees such as the one unseen in the photo above but instead of challenging MPs, they need to bring into the committee rooms previous Prime Ministers and Education Secretaries. The reason for this is it is Governments, not Schools who invented league tables and comparison criteria. As this Government website explains, the published data on Schools goes back to 1991. This would suggest that those Prime Ministers would be May, Cameron, Brown, Blair and Major. The Education Secretaries are somewhat more numerous: Greening, Morgan, Gove, Balls, Johnson, Kelly, Charles Clarke, Morris, Blunkett, Shephard, Patten and Kenneth Clarke.

What is clear is that this focus on league table comparisons has strengthened over time and so the more recent Governments must therefore take a strong level of any challenge.

Perhaps it is time for Ofsted to be given a chance to inspect the Government and its predecessors before they resume their inspections in September.

I am passionate about the need for public policies to be made accessible to everyone, especially those who want to improve the wellbeing of their communities. I am particularly interested in issues related to crime and policing as well as health services and strategic planning.
View all posts by ianchisnall →
This entry was posted in Education, Parliament and Democracy and tagged Amanda Spielman, Conservative Party, Labour Party, Ofsted. Bookmark the permalink.