We need politicians who understand history 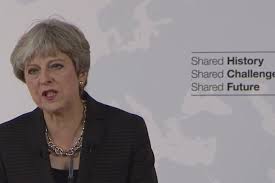 I confess I was confused regarding the venue for Theresa May’s speech until I read the transcript, and then I became even more confused. She began: It’s good to be here in this great city of Florence today at a critical time in the evolution of the relationship between the United Kingdom and the European Union. It was here, more than anywhere else, that the Renaissance began – a period of history that inspired centuries of creativity and critical thought across our continent and which in many ways defined what it meant to be European. A period of history whose example shaped the modern world. A period of history that teaches us that when we come together in a spirit of ambition and innovation, we have it within ourselves to do great things.

It is extremely arrogant and naive to claim that Brexit is the beginning of a new phase of European History in the way in which the Renaissance is seen as a turning point in that History. In any case rather than looking back 750 years, perhaps it would have been more sensible to look forward and choose a location such as Frankfurt or Paris and to have passed a symbolic baton to the city elders as London destroys its International influence. William Roscoe was a Liverpool banker who joined Wilberforce’s anti-slavery team. He published a biography of Lorenzo de’Medici in 1795. The book begins with the lines: Florence has been remarkable in modern history for the frequency and violence of its internal dissension, and for the predilection of its inhabitants for every species of science and every production of art. However discordant these characteristics may appear, they are not difficult to reconcile. The same active spirit that calls forth the talents of individuals for the preservation of their liberty, and resists with unconquerable resolution whatever is supposed to infringe them, in the moments of domestic peace and security seeks with avidity other objects of employment.

If we were to take these words and reflect back on the last 125 years including this weeks speech, the turning point in modern European History was the Treaty of Paris which was a bottom up response to the two European World Wars. This resonates with Roscoes reference to violence, and the treaty which formed the European Coal and Steel Community brought together Governments and created a lasting peace for all citizens. The way in which the ECSC was translated into the EEC and then the EU by Governments, heavily influenced by our own, inevitably brought about the bureaucracy that so many Brexiteers now claim attack on our sovereignty. Yet like all agreements the legal framework can occasionally be a threat as well as a vital safety net. The fact is that the EU has fostered a resurgence of shared European Art and Science just like the Renaissance as well as Free Trade. If the Renaissance is truly an inspiration for Theresa, she should try comparing it to the positive elements of the EU and consider if her claims that leaving will bring about positive change, are credible.

May went on to say: The weakening growth of global trade; the loss of popular support for the forces of liberalism and free trade that is driving moves towards protectionism; the threat of climate change depleting and degrading the planet we leave for future generations; and most recently, the outrageous proliferation of nuclear weapons by North Korea with a threat to use them. Here on our own continent, we see territorial aggression to the east; and from the South threats from instability and civil war; terrorism, crime and other challenges which respect no borders. The only way for us to respond to this vast array of challenges is for likeminded nations and peoples to come together and defend the international order that we have worked so hard to create – and the values of liberty, democracy, human rights and the rule of law by which we stand.

This is a justification for a closer unity, not a greater distance between ourselves and France and Germany. She then explained why 52% of voters chose to leave the EU: They want more direct control of decisions that affect their daily lives; and that means those decisions being made in Britain by people directly accountable to them. The strength of feeling that the British people have about this need for control and the direct accountability of their politicians is one reason why, throughout its membership, the United Kingdom has never totally felt at home being in the European Union. And perhaps because of our history and geography, the European Union never felt to us like an integral part of our national story in the way it does to so many elsewhere in Europe.

It is a matter of choices. The profound pooling of sovereignty that is a crucial feature of the European Union permits unprecedentedly deep co-operation, which brings benefits. But it also means that when countries are in the minority they must sometimes accept decisions they do not want, even affecting domestic matters with no market implications beyond their borders. And when such decisions are taken, they can be very hard to change. So the British electorate made a choice. They chose the power of domestic democratic control over pooling that control, strengthening the role of the UK Parliament and the devolved Scottish Parliament, Welsh and Northern Ireland Assemblies in deciding our laws.

These words do raise the question if the 16M voters who were in the minority on 23rd June 2016 should tolerate such confused arguments. This is particularly true for those in Scotland and Northern Ireland who were in the majority in their countries, yet because of the way in which the UK Parliament has handled this whole process they are now forced to accept a minority dictating their future? If Mrs May really wants to put this into historical context, perhaps she is hoping to be seen as a modern day successor to the Prince Machiavelli?

I am passionate about the need for public policies to be made accessible to everyone, especially those who want to improve the wellbeing of their communities. I am particularly interested in issues related to crime and policing as well as health services and strategic planning.
View all posts by ianchisnall →
This entry was posted in EU Referendum, Parliament and Democracy and tagged Boris Johnson, David Davis, Florence, Frankfurt, Machiavelli, Paris, Philip Hammond MP, Theresa May, William Roscoe. Bookmark the permalink.