G4S must be barred and Oakhill closed! 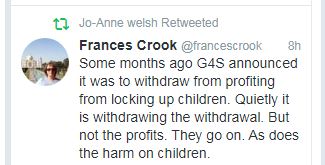 The tweet shown here from Frances Crook draws to attention the fact that it appears that despite their statements earlier in the year, G4S remains ‘in control’ of a number of ‘Secure Training Centres’ including the Milton Keynes based Oakhill STC which has just been through an OFSTED inspection. The report was published yesterday. It can be found here along with previous inspection reports. The nature of OFSTED inspections is that they offer 4 possible grades in their areas of inspection:

Each inspection offers an overall grade and this is formed from the grades on the various elements of the inspection. The Oakhill inspection focused on the following areas:

All apart from achievement and health were judged Inadequate by the Inspection team and they were both judged to be requiring improvement so this led to the overall rating being assessed as Inadequate. This is a major collapse when compared to the previous inspection which was published in March of this year. On that occasion OFSTED reported that all areas bar two required improvement. They were promoting positive behaviour which was judged as inadequate and achievement which was judged as good. The previous inspection published in March 2016 was judged as good overall with three areas requiring improvement and the rest good.

Reading the Overall Effectiveness section of yesterdays report is deeply concerning with one sentence summing up the situation “There is very little understanding of the needs of young people in the centre”. If this was a School, the parent would probably have withdrawn their children at the last inspection but a statement like this if applied to a School would see it closed overnight.

We need Sam Gyimah who remains prison Minister to bring this establishment to an end, to remove G4S from their work as managers of parts of the prison estate and to change the way in which young people are held in custody. He may not be able to do this as quickly as parents would withdraw their children from a School but we need the children’s commissioner Anne Longfield to stand up and demand change in the way in which parents would if their children were at a School that did not understand the needs of  children. Oakhill is a prison on the patch of Anthony Stansfeld the Thames Valley Police and Crime Commissioner. He too should be calling for its closure.

I am passionate about the need for public policies to be made accessible to everyone, especially those who want to improve the wellbeing of their communities. I am particularly interested in issues related to crime and policing as well as health services and strategic planning.
View all posts by ianchisnall →
This entry was posted in Justice Issues, Parliament and Democracy, Police & Crime Commissioner, Policing, Youth Issues and tagged Anne Longfield, Anthony Stansfeld, Frances Crook, G4S, Oakhill Secure Training Centre, Sam Gyimah. Bookmark the permalink.