The election season is upon us 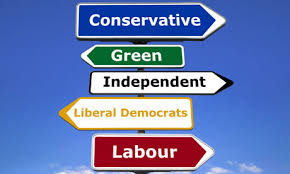 We are about to enter a busy season of elections that will no doubt keep us all busy. At the beginning of next month many of us will be asked to vote for our Councillors. We can then relax and focus on Eurovision which for those of us who live in Brighton will be a chance to celebrate the 45th Anniversary of the success of Abba at the Dome complex. Then we will get a chance to elect MEPs who may only be in post for six months, or could be in post for four years depending on the outcome of the referendum which one assumes will take place a few weeks later, assuming of course the Government and Opposition choose to invite us to participate in the outcome of their dynamic discussions and then once Theresa steps down as Prime Minister and the replacement has been in No 10 for a few weeks, there is a prospect that we will get a chance to vote for a new Government or to endorse the old one with a new leader.

All of the votes referred to above including those for the Eurovision contest are very different in terms of the processes involved and no doubt some of us will have views about which ones work best. However with the exception of Eurovision, the decisions regarding how these matters are organised will all be determined in one of the places that is heavily impacted by one of the systems. The House of Commons is the place where all of these decisions take place and yet the MPs involved are clearly dependent on how their votes are carried out and how big and what shape their constituencies are. Along with the decisions regarding what types of votes are required, the House of Commons is also uniquely powered to determine matters such as if we need to prove who we are when we do vote and whether we can vote on line, by phone or if we have to turn up at a local school or place of worship and stand in a wooden booth and use a pencil to cast our vote. They could also determine whether voting is optional or legally binding and whether we can select ‘none of the above’ or if we have to express our lack of confidence in some other way. My own view is that the review of all these voting processes should take place from time by people who have nothing to gain by such decisions, and such decisions should then be endorsed or rejected by the voters, not by the professional politicians. However we currently do not have such an independent and accountable mechanism for these changes to take place. As an example last week the House of Commons was debating one of the elements of this and it was very clear that the political parties disagree with one another on such matters.

During the debate only one Sussex MP participated although another raised a question on the same theme a few weeks ago. Both Peter Bottomley and Henry Smith support the use of voter ID which their party will implement after the next General Election assuming they win the election and the 10 pilots which are lined up for the next local elections give them the result they want. As the opponents to the idea made clear, the amount of fraud in UK elections amounts to 0.000002% of the number of voters and the cost of the ID will be about £20m or a 20% increase in the cost of General Elections. However there is a gain for people who support the idea of an ID card as we will all be entitled to a free ID document that local Councils will organise for us! The other two issues which I found of interest in the discussion was that the Government is not taking any steps to increase voter turnout and that they do not approve of online voting facilities and so presumably not telephone based votes either. However the Minister did state “Electoral fraud is an unacceptable crime that strikes at a core principle of our democracy.. the Electoral Commission has investigated the [referendum] allegations .. we have those rules, we have an independent regulator, and we have those investigations. That is what voters should expect of the electoral system” It is therefore very strange that the Government has not raised a question regarding the outcome of the 2016 referendum and used this argument to explain why a 2019 referendum regarding the European Union and our departure or membership renewal is clearly needed!

I am passionate about the need for public policies to be made accessible to everyone, especially those who want to improve the wellbeing of their communities. I am particularly interested in issues related to crime and policing as well as health services and strategic planning.
View all posts by ianchisnall →
This entry was posted in Brighton & Hove, EU Referendum, Parliament and Democracy and tagged EU Referendum, Eurovision, General Election, Local government. Bookmark the permalink.