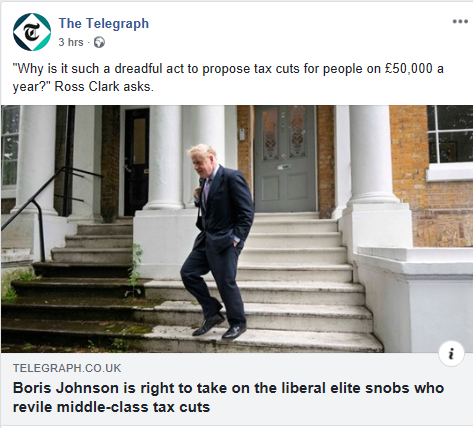 Our Government claimed almost a year ago that austerity had ended, even though the cuts to police, education, NHS, low income benefits and local government are still impacting the deepest bones of our society. However if suddenly the Government discovered that it had £9.6bn available to use to remove some of the pain, there are lots of ways they could use those funds to remove problems that impact most people or even all of us. However if an arrogant and dishonest Prime Minister candidate claimed instead that he had found the money down the back of a settee and he would give it directly to the top 3million earners in the UK, it should send a clear message to even the most out of touch journalists that his public policy approach is deeply flawed. Of course there are many people earning £50,000 upwards including possibly some high profile journalists who save or invest little and spend most of their income, so cutting taxes for this group of people would not be entirely bad for parts of the economy, but if the rest of society is to be denied the same benefits then one should be questioning if this approach is suitable given the massive inequalities that already exist between the richest and poorest in our nation. But in any case by investing 10bn in say policing, or early years education or local government the whole of society would benefit so most people would question if this offer to appeal to a small number of relatively wealthy people makes any sense. However and there is a big However, calling those of us who can see the major flaw in this approach ‘liberal elite snobs’ when people like Ross Clark and his fellow Telegraph writers are highly elite and definitely snobs seems a bit rich. Of course they may not be liberal in their thinking, but they are also not very well connected to the nation that supports them so well. So perhaps Ross and his mates should spend some time with people who earn a great deal less than £50,000 and who serve society in a setting that rarely sees the Telegraph newspaper at the local fish and chip shop or in the local GP surgery.

I am passionate about the need for public policies to be made accessible to everyone, especially those who want to improve the wellbeing of their communities. I am particularly interested in issues related to crime and policing as well as health services and strategic planning.
View all posts by ianchisnall →
This entry was posted in Economics, Education, Health Reform, Housing, Journalism, Parliament and Democracy, Policing, Welfare Reform, Youth Issues and tagged Boris Johnson, Daily Telegraph, Ross Clark. Bookmark the permalink.