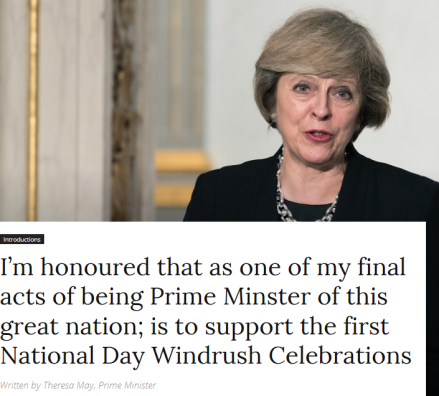 It is hard to see this image and not be concerned that when she was Home Secretary, Theresa introduced a law change seven years ago on 9th July 2012 demanding that people who are working, want to rent a property or have access to benefits, including healthcare will need documentation proving their right to live and work here. The fact is that many of the people who were invited to come into our nation in previous generations or their children have never been provided with that documentation by our Government. Of course the irony is that a large proportion of London properties and premises in certain other locations including Brighton and Hove belong to people from other nations who are free to come and go whenever they wish simply because they are wealthy and in a number of cases willing to help fund the Tory party or buy football clubs. Some of the causes of the 2012 law change came about in response to multiple waves of public and political party rejection directed at people from other cultures and nations. These variations of racism and political opposition to the way the previous Government had responded to the growth of the EU, some of which are much more extreme than others all need challenging rather than being harnessed to destructive laws. At one extreme these racist ideas need the criminal law applied to the people concerned and that includes the Anti-Semitism and anti-Islamic views expressed by members of various political parties that claim to be our leaders or claim to be competing to become our leaders. At the other end of the spectrum we need political and civic leaders to begin to promote the benefit of multiculturalism for our nation so that we can begin to emerge from our acute destructive condition which began on 24th June 2016. According to Encyclopedia Britannica:

“Multiculturalism, the view that cultures, races, and ethnicities, particularly those of minority groups, deserve special acknowledgement of their differences within a dominant political culture.

That acknowledgement can take the forms of recognition of contributions to the cultural life of the political community as a whole, a demand for special protection under the law for certain cultural groups, or autonomous rights of governance for certain cultures. Multiculturalism is both a response to the fact of cultural pluralism in modern democracies and a way of compensating cultural groups for past exclusion, discrimination, and oppression. Most modern democracies comprise members with diverse cultural viewpoints, practices, and contributions.”

I am passionate about the need for public policies to be made accessible to everyone, especially those who want to improve the wellbeing of their communities. I am particularly interested in issues related to crime and policing as well as health services and strategic planning.
View all posts by ianchisnall →
This entry was posted in Parliament and Democracy and tagged Multiculturalism, Theresa May, Windrush. Bookmark the permalink.