Nigel Farage is totally unsuitable to remain as my MEP 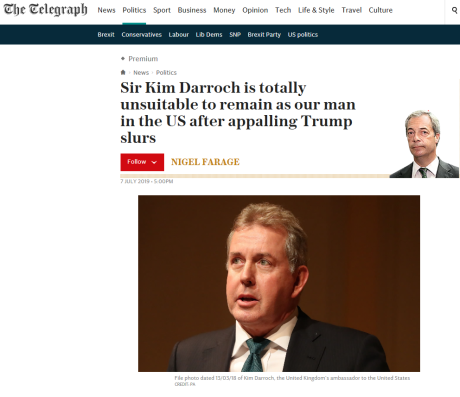 As my MEP Nigel, Farage has every reason to write a piece for a newspaper and as a right wing and pro Brexit newspaper it seems entirely understandable for the Torygraph to give Farage a chance to write a piece for their on-line paper as they did here. On the same basis Farage has every reason to disagree with Kim Darroch who clearly has a very poor view of Farage’s apparent chum, Donald Trump. However that is where the piece should stay. The reality is that Kim Darroch is our American Ambassador, someone who works for our Government and as such he is paid to make judgements about the American nation and to pass those judgements on to the Government, both privately and if appropriately publicly. If the UK Government believe his judgement is inappropriate, they have every reason to remove him as our Ambassador. However if they chose to allow his private judgements to be made public, he has every reason to be angry and indeed MEPs also have every reason to be angry towards the Government, rather than towards the Ambassador. It is widely known that back in 2016, my MEP Nigel Farage wanted to be the UK Ambassador to the USA. One of the reasons why his wishes were based on deep ignorance was the idea that his selection was based on the opinion of Donald Trump. The point is that our Ambassador is the representative of us and our Government and whilst they need to attempt to maintain a first class relationship with the nation where they are based, that is a secondary matter. If the Ambassador in the US believes that their President is incompetent, that is a perfectly reasonable assessment providing that is kept private between the Ambassador and the Government. Nigel Farage has people who work for him and they keep his views secret and he listens to their views and keeps those secret. So he needs to transfer that understanding to the role of an Ambassador.

As Farage stated in the article “he was not my sort of chap” and that when Kim was the EU Ambassador he asked “aren’t you supposed to be neutral?’ He replied: ‘No, its our policy that the European Union is a good thing’.” The reality is that our Ambassadors are certainly not neutral. The carry out the wishes of their Government. For Farage not to realise this is why he is unsuitable to be my MEP and certainly not suitable to be an Ambassador!

I am passionate about the need for public policies to be made accessible to everyone, especially those who want to improve the wellbeing of their communities. I am particularly interested in issues related to crime and policing as well as health services and strategic planning.
View all posts by ianchisnall →
This entry was posted in Parliament and Democracy and tagged Daily Telegraph, Donald Trump, Kim Darroch, Nigel Farage. Bookmark the permalink.