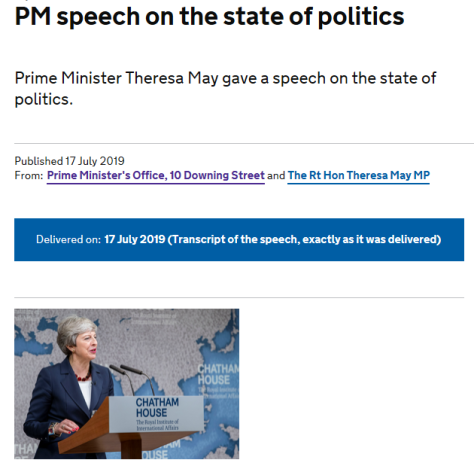 I was interested to hear a few snippets of the speech by Theresa May last night and so I thought I would find out what she actually said, so I went to this website which is part of GOV.UK and specifically the ‘Prime Ministers Office, 10 Downing Street’ section. The website kindly printed the images above and the transcript of her speech. I read it and indeed have reproduced two sections which I consider to be the most relevant below. However after those two elements which come from the central part of the speech, she apparently stated:

“Take the example of how we address some of the concerns and fears over globalisation.

But we know it is free and competitive markets that drive the innovation,…”

This is surely as much of a concern as some of the other aspects. Given that the speech has been recorded by a number of media outlets and is no doubt transcripted by several of them, one wonders how credible it is for the Government to remove content from the Prime Ministers speech because they claim it is political. After all the whole of her speech is political and the majority of her speech was deeply party political. Anyway here are the two sections that I consider worthwhile reading:

….That is politics at its best.
The alternative is a politics of winners and losers, of absolutes and of perpetual strife – and that threatens us all. Today an inability to combine principles with pragmatism and make a compromise when required seems to have driven our whole political discourse down the wrong path. It has led to what is in effect a form of “absolutism” – one which believes that if you simply assert your view loud enough and long enough you will get your way in the end. Or that mobilising your own faction is more important than bringing others with you. This is coarsening our public debate. Some are losing the ability to disagree without demeaning the views of others. Online, technology allows people to express their anger and anxiety without filter or accountability. Aggressive assertions are made without regard to the facts or the complexities of an issue, in an environment where the most extreme views tend to be the most noticed. This descent of our debate into rancour and tribal bitterness – and in some cases even vile abuse at a criminal level – is corrosive for the democratic values which we should all be seeking to uphold. It risks closing down the space for reasoned debate and subverting the principle of freedom of speech. And this does not just create an unpleasant environment. Words have consequences – and ill words that go unchallenged are the first step on a continuum towards ill deeds – towards a much darker place where hatred and prejudice drive not only what people say but also what they do.

….And although the problems were building before the financial crisis, that event brought years of hardship from which we are only now emerging. Populist movements have seized the opportunity to capitalise on that vacuum. They have embraced the politics of division; identifying the enemies to blame for our problems and offering apparently easy answers. In doing so, they promote a polarised politics which views the world through the prism of “us” and “them” – a prism of winners and losers, which views compromise and cooperation through international institutions as signs of weakness not strength…..

It seems rather disturbing that a Prime Minister whose Government has managed to strengthen the polarisation created by her predecessor through the EU referendum, and who has failed to either challenge the extremists who have used Brexit to damage other people or sought to find a way of reaching out to the communities despite her constant promises to do so is speaking about polarisation as if it is the fault of other people. She is calling for people to be accountable, yet has hidden part of her own speech because it is considered to have been political!!!!!

I am passionate about the need for public policies to be made accessible to everyone, especially those who want to improve the wellbeing of their communities. I am particularly interested in issues related to crime and policing as well as health services and strategic planning.
View all posts by ianchisnall →
This entry was posted in EU Referendum, Parliament and Democracy and tagged Brexit, David Cameron, Theresa May. Bookmark the permalink.