King Alfred and other large schemes need a different approach 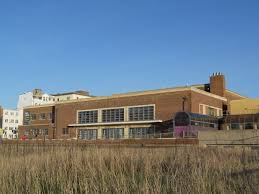 The commercial size of the replacement for King Alfred and the impact on our city of successful or failing contracts surely means we need to find a new way of delivering such large schemes. The news yesterday of the collapse of the Crest Nicholson scheme designed by Haworth Tompkins which emerged in 2016 is a follow on from the collapse of the Karis Holdings scheme designed by Frank Gehry which was announced in 2003. Given that the original building which is in serious need of replacement or rebuilding was 80 years old last year, it seems as though we may not see a replacement until it is approaching its 100th Anniversary. As a resident of Brighton living on edge of the city in the North Eastern quarter I am a long way away from King Alfred and so I have very little knowledge of what is taking place but I do recall being involved in discussions with Chris Gilbert of QED Property who spent many hours holding discussions for buildings that were being proposed for the site that was on the edge of Brighton train station. At that time my children went to St Bartholomew School and I was helping to manage a building on the London Road which was also nearby. The last part of that area in terms of the buildings on and around the site has just been finished and Chris deserves a great deal of credit for the approach he took at the time. Based on the news pages it appears that for 2 years after the Crest Nicholson scheme was given the green or at least amber light that no meetings took place involving Councillors who had spent a lot of time arguing for their involvement raises the question of how well it can work if Councillors are part of the project management. To be fair the Brighton station site was a vacant site and clearly the King Alfred site is actively used. However every year that goes by makes the site feel even more desperate for its refurbishment or replacement. It would be interesting  to know if Chris Gilbert would have a view about what the Council should do next?

I am passionate about the need for public policies to be made accessible to everyone, especially those who want to improve the wellbeing of their communities. I am particularly interested in issues related to crime and policing as well as health services and strategic planning.
View all posts by ianchisnall →
This entry was posted in Brighton & Hove, Housing, Parliament and Democracy and tagged Brighton & Hove City Council, Chris Gilbert, Crest Nicholson, Frank Gehry, Haworth Tompkins, Karis Holdings, QED Property, St Bartholomew School. Bookmark the permalink.