We need a #constitutionalreform if as he claims there’s been a coup! 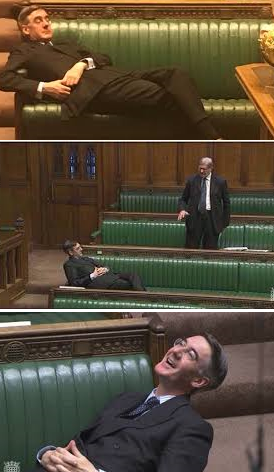 The claim from the Leader of the House of Commons shown here in three of his appearances in the House of Commons, the lower two of which to be fair were before his promotion, that the unanimous judgement by 11 Supreme Court Judges over nearly a week of their consideration is a ‘constitutional coup’ and ‘the most extraordinary overthrowing of the constitution’ raises all sorts of questions. As I wrote a few days ago the decision by Jacob’s boss, Boris to close down Parliament demands a constitutional reform that will be set out and written and approved by Parliament is vital. He chose to close down Parliament after he had only been there for one day as Prime Minister which was a decision that despite all sorts of claims by his supporters was not in any way conventional with the history of Parliament. Clearly the constitution cannot be written this side of the next election and the deadline set by Johnson for our departure from the EU. However a call for a formal and clear constitution is vital.

I am passionate about the need for public policies to be made accessible to everyone, especially those who want to improve the wellbeing of their communities. I am particularly interested in issues related to crime and policing as well as health services and strategic planning.
View all posts by ianchisnall →
This entry was posted in Parliament and Democracy and tagged Boris Johnson, Jacob Rees-Mogg. Bookmark the permalink.